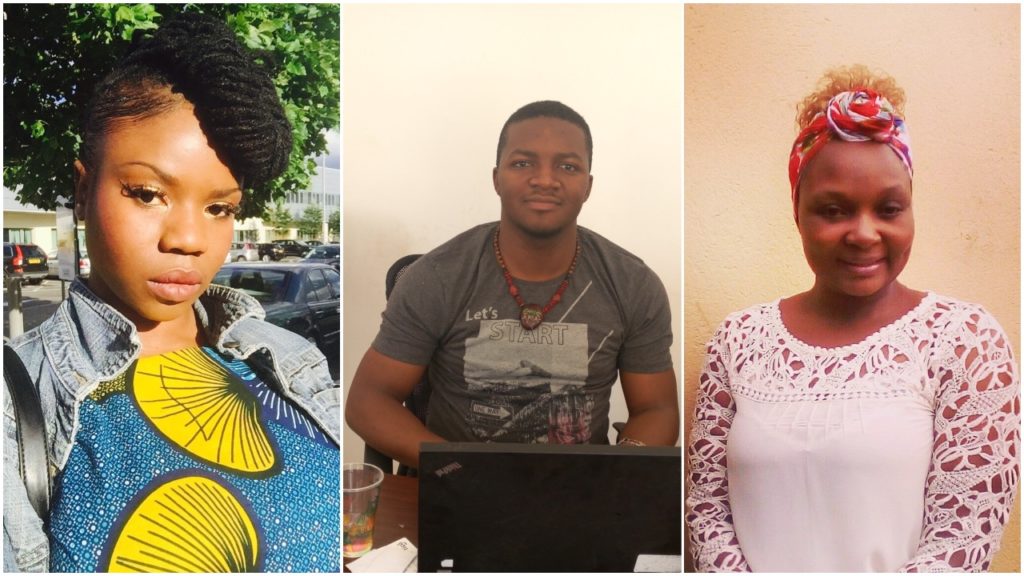 I told you we were done and I meant it. Go to hell, I say, with steaming courage.

My brow softens, and I am in no doubt of this Elysian evenfall. Bliss. As I imagine the possibilities, fluorescent joy fills my cornea. Eye of Horus. No need for a ministry of living proof.

My heart fluttered and in response, I uttered the first thought to enter my mouth, that it was coarse to respond to a question with a question, at which the voice laughed. The sound was melodic, cavernous, yet lighter than my tinkling waist bells.

The Short Story is Dead, Long Live the Short Story! prides itself in providing a testing ground for emerging African writing. In the last two years, we have given voice to new writers whose trialling work might otherwise have ended up languishing in unget-at-able zines or lost to the cacophony of online publications, even as we firmly believe it is in the nooks and crannies of niche spaces like Omenana, Jungle Jim and Will This Be a Problem that we find the most clear indication as to which direction African literature might be going.

For the third volume of our annual anthology, we selected sixteen short stories from writers who claim some part of Africa as home. In many ways, these stories reaffirm African literature as still that which blatantly concerns itself with topics relating to the continent and its position in the world, even when the spotlight is only cast on a West African community that is not in the least bit self-contained (Firewater) or a single act of mundane logic is fleshed out into a bigger narrative of gender conflict (Tanganyika ABCs) or just the mere promise of catharsis launches a subversive take on an old theme (Petrichor).

Six stories made it onto our shortlist for this year:

The three stories each give something different. These stories are about a journey, about making hard decisions, and about growing through the pain of it all. These three stories stand out because of the choices that the authors made with structure, world of story and imagery.

We are happy to announce the winners:

With ‘Tanganyika ABCs’, Tina Chiwashira weaves in and out of the past as she connects the narrator’s own failing relationship with that of her mother and father in the past. She connects the past to the present, herself to her mother, and, in the end, the narrator has a tough decision to make. The success of this story is in the effect that the going back and forth between time leaves us with. We feel the dis-ease of the narrator and wait for release.

Osemegbe Aito takes us to a world where the advancement of technology may or may not be a fallacy. In ‘Petrichor’ we wonder whether the choice our main character has made is the right choice. We wait with her at the pearly gates and hope that what she wants really is on the other side. Through her anticipation, and the build up, we wonder if we would choose between life and death voluntarily. This story has a clean, calmness to it, which belies the fear inside.

With the opening line – “I was born beneath the ocean waves, or so that’s what they tell me” –  Mary Ononokpono’s ‘Firewater’ draws us into a world where the line between real and ethereal is immaterial. And in this enchanting old world, there are many lines blurring in this world as the community tries to protect itself from the outside world not realising that change can sneak in even when you try to keep it out. The author succeeds in painting a world so wondrous that we get lost in it following this girl who has no name, is drawn to the waters and will be outside of the fold.

—Judge’s remarks
Congratulations to Mary, Osemegbe and Tina, and all the writers who made it onto volume 3 of The Short Story is Dead, Long Live the Short Story! Interviews with the shortlisted writers can be found on our blog. The anthology will be launched in early 2018; pre-orders can be made here and here.