In Eliza Mabungu’s short story, Rudo, home is an ambiguous entity, not always conducive to a comfortable life defined by the freedom to make personal choices – all the conflicts that matter are, at heart, questions of where we choose to make our homes and why.

Black Letter Media: We see Rudo navigate the maze of censorious, paternalistic social regulations that define her village, even as you background the story with the minutiae of her period pains. Given how menstruation activates in Rudo a furious craving for her individual freedom, were you consciously attempting to renegotiate African identity here from a fulfilling, feminine point of view that takes into account the policed sexuality of black girls?

Eliza Mabungu: Yes, Rudo comes from a need to redefine the predefined gender roles. It is at the beginning of a woman’s periods when the policing comes to play. You are a bit scared but instead of being told that this is normal you are told not to have sex because you will fall pregnant. Women aren’t mostly afforded an opportunity to have a say in their sexuality and when they do; “they are feminists” which in this case is ambiguously mentioned as a bad quality.

BLM: There’s also the duality of un/freedom in Rudo. It seems as though she is consciously making a choice to live a life that defies her traditional expectations, but at the same time she does believe in the possibility that tradition can be changed, be updated?

EM: Rudo is a representation of traditional pressure. There’s that belief in her that  her mother knows better. No one has affirmed to her that defiant souls can make it and there’s that scare of alienation. Only experience allows her to believe in change.

BLM: The question of finding new ways to tell our narratives, new tactics to confront old indignities, of course the coloniality of gender that informs “Rudo” is crucial to our understanding of the narrative; you present your story in a paragraph-less hunk, zeroing in on one anthill when the hillside is dotted with so many. As a reader, are you generally drawn to small moments or does the metanarrative hold sway?

EM: The paragraph choice mimics Rudo’s inability to escape the gender expectations that she’s met with from the beginning to the end. Life offers her no break and this representation aims to present that, but I believe that every reader approaches text from their experience with other of its kind. In this case, a reader’s interpretation  is unpredictable because others are more interested in the story than the paragraph and all that.

BLM: The ending is a little hopeful though?

EM: The ending is a little hopeful as it leaves the reader wondering about Rudo’s life after it all. Will she fit in after defying their traditional expectations?

BLM: Someone was speaking about Scholastique Mukasonga’s novel, Our Lady of the Nile, saying something like “we watch as these girls try on their parents’ preconceptions and attitudes, transforming the lycée into a microcosm of the country’s mounting racial tensions and violence”. How much of our parents’ compromised beliefs do you think we perpetuate, even when we sometimes don’t see it? Can the Black immigrant in South Africa be said to also hold xenophobic notions, just as the makhwaphenis in your story affirm Tenda’s toxic, patriarchal tendencies?

EM: “I am your god,” my father used to say. We subconsciously carry our parents’ beliefs even when they aren’t around. Look at how Rudo was conflicted between pleasing herself and her mother.  From a tender age we have always sought their approval and mirrored most of the things they do.  I was raised by a feminist father and a mother who carried patriarchal beliefs. Her beliefs came to play after the death of my father and at times I would avoid doing things because her voice was etched in my mind. I had the fear of hearing her say,”but I told you that a woman doesn’t go out at night, look at you now.” These beliefs fluctuate and now I have grown a great interest in the independent woman my father always wanted me and my sisters to be. I  don’t believe that immigrants hold xenophobic notions. The answer to who are you is not; “I am a Black immigrant” but “I am Shona, Ndau or Shangaan”. Immigrants don’t have the word foreigner echoing in their minds but the title is mostly uttered by citizens. Having certain observations about my Mozambican roots doesn’t mean that I  hold xenophobic notions but it’s the same as a critical observation from a Zulu or Tsonga person about their own culture. Remember, I am of  Ndau descent before I can be defined in terms of being South African or Mozambican.  Every critical stance doesn’t distinguish me but aims to assess the system in place. A world that produces such questions deserves great intervention because it attests to great ills.  Abomakhwapheni and xenophobic notions are at a different level of existence. 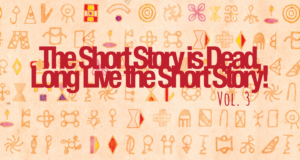 BLM: You have featured in Experimental Writing: Africa vs Latin America Vol 1, and your story there cannot be said to foreshadow “Rudo”. Yet, I’m very curious to hear what your thoughts are on the need for challenging African fiction, seeing that you’re in that anthology?

EM: I’m not a thematic writer and my pieces just take their own routes. I believe that African fiction needs to bring to light the ills of our society. As storytellers we bear the responsibility to say what people can’t say in order to create harmony. If one is judgmental about a particular issue, as a writer she needs to educate herself more in order to understand human behavior. I would like to cover stories about the shunned upon and humanize the demonized in future.

BLM: I quite enjoy seeing fresh tactics in how we plot new routes of engagement with Africa, so to speak; that is, Africa as a space characterised by experiences of resistance and vulnerabilities. How do we encourage spontaneity in our storytelling – employing the full breadth of our being, all the languages we speak etc, as a way to complicate who and what is Africa/n?

EM: Africa is such a rich continent with languages that actually carry great meaning than the overemphasized western languages. A friend once narrated a story of her sibling who was robbed in town. People passed her as she asked for help in English but only when she started speaking her language, did she receive help. “Cry in your mother tongue,” she noted. The beauty is to acknowledge the duty to represent our African cultures. When we speak the language people speak without being afraid of being dissed; they listen.

BLM: And yet we tend to complicate things for ourselves when it comes to our writings – one wonders if we actually know how to “cry in our mother tongues” in our fiction or poetry?

EM: I think that some of us know how to and we actually should cry in our mother tongue and if we don’t know how to, we can learn. We are creative after all, we need to be open to exploring new things.

BLM: Fiction has the right to question the stultifying conformity of traditional life, with its far-reaching implications for those of us who are simultaneously of the rural and urban – we’re the multi-locals of Taiye Selasi, at home in many places. I do wonder, given that you were born in one country and now live in another, how do your own experiences of home particularize your notion of what it means to be African?

EM: I am South African born actually. Only my parents are Mozambican, funny enough I have never been to Mozambique. My experiences stem from interactions with relatives and acquaintances.

BLM: Which raises a new question about home. “Eliza Mabungu is a South African-born Mozambican writer…” Your bio. Is home where you have left footsteps, even if those belong to a parent?

EM: I am actually conflicted with where I call home between the two. Now that you have brought it up, I think my bio says it all. I can’t ignore the fact that both these places shape me. I am fluent in my native language and I know most South African languages, I think they both are my home.

Eliza Mabungu is a South African-born Mozambican writer, currently  based in Pretoria. She is a film graduate from the University of Johannesburg. She mostly writes short stories; her work has been featured in Experimental writing: Africa vs Latin America anthology.

Copies of “The Short Story is Dead, Long Live the Short Story!” can be preordered here; we recently announced the winners for the third volume – read all about it here.